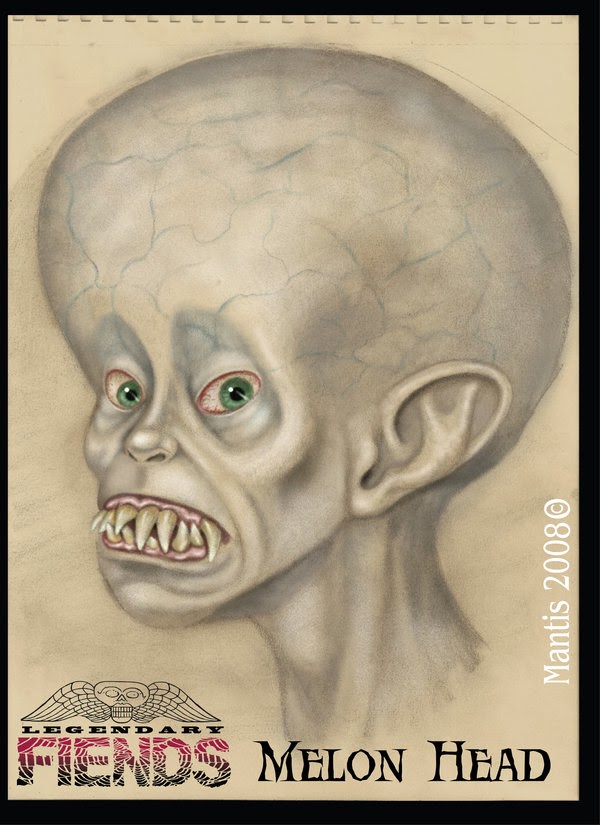 Melonhead is the name given to a race of mutant cannibals that live primarily in Connecticut's Trumbull county. They are described as being short, pale, and gaunt, with large bulbous heads. Their teeth are yellow and blocky and their eyes are a pinkish red. Melonheads usually act aggressive towards people. They are usually nocturnal, and it has been reported that sunlight causes them pain or weakens them greatly. This, coupled with their appearance, makes many researchers believe that they are horribly deformed albinos.

The most prominent and wide held belief among researchers is that melonheads were people just like you and me once. The leading hypothesis behind their origins is that they were patients at a mental asylum that burned down years ago. In fact their was a tragic fire that burned down an asylum in Trumbull county years ago. A few of the patient's weren't accounted for and their bodies were never counted among the dead. Many believe that they fled into the surrounding woods and turned to cannibalism after being unable to find food. People that go hiking or driving around the area of the old asylum have gone missing, leaving anything form no trace to their abandoned car. There is a road in Trumbull called Velvet Way, which is known by the locals as Dracula Drive. Much Melonhead phenomenon is reported there. Although gaunt, Melonheads are reported to be incredibly strong, able to withstand being hit by a car, and know to push cars off the road. They do NOT like bright lights and these can be used to disorient and blind them. Some survivors of melonhead attacks report using LED or Floodlights to escape the creatures. They may be found in other places also. They have been reported as far north as Maine and as far south as Florida, and everywhere in between. Melonheads may or may notintelligent, they tend to hunt in packs and may communicate. It seems that they are intelligent but they're origins, if correct, would suggest otherwise. They are supposed to beinbredmutants who's grandparents were from a mental asylum who where probably suffering from hydrocephalus, ( a build up of fluid in the skull which can cause insanity and retardation, and also makes the skull swell, which explains their large heads). The melonheads are feared in Trumbull county, locals don't travel the back roads at night, and no one goes into the woods alone or at night. There have been disappearances around the area. Those that vanish aren't heard from again. Some believe that they may be used for something other then food (have to keep your numbers up somehow, right?). (compare to: Blood farmers). There are many first hand accounts of encounters with melonheads. They might have a societal hierarchy with a more intelligent individual on top...
Melon Heads
STR: 4 (60) WPR: 4 (60)
DEX: 3 (45) PER: 1 (15)
AGL: 3 (45) PCN: 4 (60)
STA: 4 (60) PWR: NA
ATT: 1/53% WND: 14
MV: L 75†
Experience: 600
Posted by Timothy Goss at 10:34 PM