Real Horror Vs. The Horror Genre 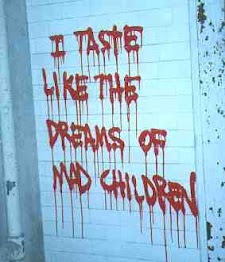 Ever ask yourself what you find terrifying? Would you rather be stalked by a madman with a chainsaw or a real life 25 foot long crocodile while you are in a dingy of a boat in the middle of the Ruzizi River near the northern shores of Lake Tanganyika. While both scenarios seem far fetched, the crocodile one is real and is played out every day when the local fishermen go out to try to catch fish to sell.The crocodile named GUSTAVE was featured on Nat Geography and a full length motion picture "Primeval" and it has been reported that he claimed the lives of 300 people which helped the massive beast attain a legendary status - so knowing that at least one of the scenarios offered could be real which one would you choose? I would take my chance with the guy in the mask, the idea of being eaten alive does not sit well with me.Now  & then its good to throw a curve ball at the players who arent expecting it. How about this, after a couple of
adventures dealing with a haunted house, the pcs are asked by the local authority to consult on a strange case - Young women, have been attacked by an unknown assailant who attacked them by biting at thier neck. Turns out what they thought was a vampire was a mentally ill person who thought he was a vampire. wait, I know what your saying..how is that scarey? There is no rhyme or reason for the actions caused by someone who may be mentally ill. Case in point, Jodi Arias - she stabbed,shot in the head and nearly decapitated her boyfriend and during her trial she was a nutter. The torture someone can inflict on another person is greater then anything known or unknown. But, lets go back to the wanna be vampire since he is a normal human he is able to go about in the daylight,etc. He started to stalk the pc's during the day and it came to a head when he murdered one of the pc's expectant wife. This unleashed a torrent of emotions in the actual player. We actually had to take a break from the game for a bit. The question is then, how do you play? do you go for the universal horror feeling, like the old BW movies we all know and love or do you follow the 1980's action horror flicks like predator or the lost boys? once you know which one of the many styles your game will follow then its time to ask yourself the following questions:
1) Could this be a news worthy article? what I mean about that is this - Jack the ripper made headlines for several reasons, for the type of crime he committed,the shear brutality of his crime and the fact that he could have been anyone.. This is more psychological horror - the true fear of the unknown
2) Does this play on the player's fears? if you know that one of your players is afraid of spiders and being buried alive then have him/her wake up in a coffin covered with spiders.. all in good fun...
3) can it be easily explained away? the scratching you heard when you went to bed could be the cat.. but wait, you do not own a cat... If its easy to explain away then it will most likely not confer that sense of fear you would want to have in a horror rpg game. Mind you, rpging a horror system is one of the hardest things to do as a CM unless you are all about the atmosphere which helps but is a bitch to setup.
4) Encounter strength ? is the encounter a one hit wonder or could you play it off for a awhile? sometimes the wait is the killer. - but on the other hand, if you overplay a encounter then it goes from horror to sorry in a short sweet step.
Back to Gustave, the pc's are sent by the weekly world news (a great source of adventure ideas) to cover the attempt to capture the beast. (news worthy right there) - When the pc's arrive on the ruzizi river,they discover the not so modern equipment they have to use (playing on a player's fear - removing them from the safety of modern day conveniences ) - for this encounter we skip item # 3 - The CM needs to determine if the encounter with gustave will be a frontal assault or a game of cat & mouse (Encounter Strength - in this case,normal crocodile actions would be like a game of cat & mouse - so you have the pc's not relaxing and they never know when he will strike again.) This ends part one - more to come soon