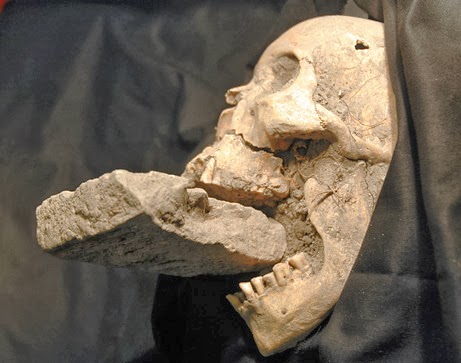 March 10, 2009—Among the many medieval plague victims recently unearthed near Venice, Italy, one reportedly had never-before-seen evidence of an unusual affliction: being "undead.
The partial body and skull of the woman showed her jaw forced open by a brick (above)—an exorcism technique used on suspected vampires.It's the first time that archaeological remains have been interpreted as belonging to a suspected vampire, team leader Matteo Borrini, a forensic archaeologist at the University of Florence, told National Geographic News.Borrini has been digging up mass graves on the island of Lazzaretto Nuovo, where the "vampire" was found, since 2006. "I was lucky. I [didn't] expect to find a vampire during my excavations," he said. Belief in vampires was rampant in the Middle Ages, mostly because the process of decomposition was not well understood.For instance, as the human stomach decays, it releases a dark "purge fluid." This bloodlike liquid can flow freely from a corpse's nose and mouth, so it was apparently sometimes confused with traces of vampire victims' blood.The fluid sometimes moistened the burial shroud near the corpse's mouth enough that it sagged into the jaw, creating tears in the cloth.Since tombs were often reopened during plagues so other victims could be added, Italian gravediggers saw these decomposing bodies with partially "eaten" shrouds, Borrini said.Vampires were thought by some to be causes of plagues, so the superstition took root that shroud-chewing was the "magical way" that vampires spread pestilence, he said. Inserting objects—such as bricks and stones—into the mouths of alleged vampires was thought to halt the disease.