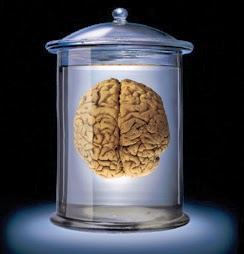 Disembodied Brain ( B.I.A.J )
[ Brain in a Jar ]
The brain in a jar is a masterpiece of preservation — but where mortuary preservatives leave off, the unexplained picks up. A disembodied brain is, in truth, an undead creature.
No one knows how or who creates them, but there seems to be one factor in common with each disembodied brain, That is the original owners of the brains were all extremely wealthy and were faced with a extreme disabling disease or handicap.
It is rumored, that months before the owner of the brain is to die, he/she is visited by a man dressed in all gray who for a price offers them eternal life. If they accept he comes back on the day of their natural death, removes the brain and places it inside a specially made vat. Moments later, the helpless person “wakes” to find out what he/she has become. This usually drives the poor victim insane which helps unleash the unsettling powers that the B.I.A.J is known to have.
A disembodied brain  weighs about 25 pounds, which includes the weight of the glass canister and the preservative fluids.
A disembodied brain can speak telepathically to any creature within 100 feet that has a language.

Telekinesis
Base: 85
Willpower Cost: 45
Check: General
Time Required: 1 round
Range: 100 feet
Duration: Round of use
This talent allows a character to move objects by the power of his mind alone. He may move WPRx2
pounds with his mind at a rate of WPR feet per round, rounded to the nearest 5 (73 WPR would be 75 feet,
72 would be 70). An object may be moved to a distance of 100 feet. Only one object may be moved at a time, even if it is lighter than the user’s maximum pounds allowed. An object may be used as a bludgeon (but
considered as a missile attack), dealing damage on the unarmed combat results key if the object weighs less than 50 pounds, or on the armed results if it is over 50 pounds. A person may be lifted into the air
and dropped for normal falling damage.
Posted by Timothy Goss at 11:11 AM