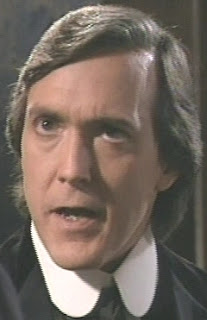 Harker is a recently admitted solicitor from England, who is deputed by his employer, Mr. Peter Hawkins, of Exeter, to act as an estate agent for a foreign client named Count Dracula who wishes to move to England. Harker discovers in Carfax Abbey, near Purfleet, Essex, a dwelling which suits the client's requirements and travels to Transylvania by train in order to consult with him about it.

At Bistritz Harker takes a coach to the Borgo Pass where at midnight another coach drawn by four black horses, waits to take him to Castle Dracula high in the Carpathian Mountains. At the castle Harker is greeted by the mysterious and ominous Count Dracula and finalises the property transaction. Soon, however Harker realises he has been made a prisoner by his host who is revealed as a vampire. Harker also has a dangerous encounter with the three seductive Brides of Dracula, whose designs on him are only thwarted by the intervention of the Count.

Later, he manages to escape, finding refuge at a convent. He has a mental breakdown upon arriving at the convent because of his encounters with Dracula; his fiance, Mina Murray, comes to nurse him back to health with the nuns' help and marries him there. He returns home to England and later sees Dracula in London. After learning Dracula killed Lucy, he joins Van Helsing, Seward, Holmwood, and Morris. His clerical skills prove very useful for collecting information and for tracking down Dracula's London lairs by means of paperwork. He vows to destroy Dracula and, if he could, to send "his soul forever and ever to burning to hell[..]!" even if it be at the cost of own soul. When confronted with Mina's curse, however, he is unsure how to react; Mina asks the others in the group to kill her if the need comes. While Harker says he would, in the privacy of his journal says that if it is necessary, that he would become a vampire himself out of his love for her. However, Harker manages to avoid that because along with Van Helsing and the others he manages to destroy Dracula. At the book's climax, he pries open Dracula's coffin mere moments before sunset and slashes open Dracula's throat with a kukri knife, possibly decapitating him, while Quincey Morris stabs him in the heart with a Bowie knife.