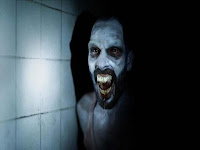 The Ghul are said to be offspring of Iblis the jinn that was cast from heaven for not prostrating himself before Adam. Ghuls are shape-shifting cannibalistic and blood-drinking spirits. Unlike normal jinn who prefer to be in the spirit form, a Ghul chooses to manifest in a corporeal form to feed on the flesh of human beings and to cause as much fear on man. Some state that a Ghul lures unwary people into abandoned places to slay and devour them then takes the form of the person most recently eaten. Once in the assumed form, a Ghul can travel in the waking world spreading fear and pain. Some historians theorize that Jack the Ripper was a Ghul. When someone has suffered at the hand of another, they can summon a Ghul to seek vengeance for them for a price, a Ghul can be summoned by meeting two requirements:
• cutting oneself and using his or her blood creates the summoning symbol
• The Summoner must provide a willing or not person(s) to act as a sacrificial offering to the Ghul. This can be anyone from a small child to an elderly person. The Ghul would kill and devour the victim to assume his or her likeness – once the likeness has been assumed the Ghul will go carry out its mission.

The price of summoning a Ghul

Most learned Imam’s from across the Muslim world have debated the very nature of these creatures and why of all the jinn they allow themselves to be summoned easily. The answer is to spread chaos and distrust among the believers and non-believers alike – a ghul wants to lead people away from the light so if it is summoned and completes the task presented to it the ghul will appear to the Summoner as someone he or she knows – revealing the final cost – the ghul will attack and devour someone the summoner cares for.
Note: When a ghul assumes the appearance of his victim – his or her soul is absorbed into the ghul allowing it to access memories and mannerisms of the victim.
A Ghul differ in many ways from the European idea of a Ghoul. The first obvious difference is that a Ghul is a type of jinn and is incorporeal. Ghouls are corporeal creatures and as such they are susceptible to harm and take normal STA and Injury damage from weapons. A ghul can only be wounded or hurt by a weapon made of iron blessed by an imam.

Stats for the Ghul

EWS: 65- 100 (Notable – Legendary) REF: 60 – 80 STA: 60-100
Injury: Superficial, Minor –10, Serious –20, Major –30, Critical –50, Lethal (when using Corporeal Manifestation only)
Disciplines: Corporeal Manifestation, Influence, Lure, Steal Form, Mimic
Aspects: Deadly Attack (claws; Serious Injury), Special Weakness (Blessed Iron Weapons), Special Weakness (verses of the Quran), Sustenance (human flesh), Regeneration, Invulnerable, Supernatural Speed
Special Weakness (Blessed Iron Weapons): a weapon forged from iron and blessed by a imam is needed to inflict damage to a Ghul
Special Weakness (verses of the Quran): A Ghul can be held at bay by reciting the call to prayer. During this time the Ghul is unable to act.
Special (Steal form): a Ghul assumes the form of whoever it devoured this also includes the memory and mannerism of the victim.